The parking lot has had a lot of changes happen to it over the summer, but how well does it actually address issues students face?

A new year brings new changes. And with the start of this school year, there have been a lot of changes around the school. A new extension has been added and the portables have been taken away. One of the bigger changes that affect students is the remodeled parking lot.

The parking lot this year has a new row in the back plus a small side parking lot. This is a lot different from last year when there was less parking spots in the main parking lot and the driving range was open to parking. But how do the numbers compare?

This year the parking lot has 632 spots plus 68 spots in the new parking lot. That adds up to a total of 700 spots.

The biggest controversy over the remodels is that the driving range has been closed to parking. There are lots of mixed feelings over this. Some students say that there isn’t enough spots for all of the students while other students disagree.

“Not all of them [the parking spaces] are being used,” said Tali Truman, SBO President. “There’s enough parking spots now and I think that we should use that to our advantage. I see people parking on the road and I don’t really get that. I see that a lot people are using the new spots and it’s fine.”

The fact remains that there is almost 2,000 students in the school. To be fair, not all students drive. Almost a third are too young, others don’t have drivers licenses or don’t have cars, some carpool, and some just walk to school.

“Obviously, the administration thinks that they have enough spots for kids to park in without having an open range,” said Mr. Ross Arnold, Driver’s Ed instructor.

Another issue with the parking lot last year was that it was congested and crowded.

“Getting out of the parking lot is not easy, especially if you’ve parked in the last three rows,” said Cody Mickelsen, hype squad member. “On a bad day, it can take as long as 10 minutes (which isn’t good when you need to get to work).”

Unfortunately, even with the new remodeling, it doesn’t seem like the congestion has gotten any better. After all, there are still only two exits.

“People are still just as unwilling to let you in and you’re just as stuck dealing with that because there’s no alternative way to get out,” Mickelsen said. “I don’t really see how that could change though.”

So, it turns out there isn’t a lot that’s changed for the students. There is almost the same amount of parking spots, and congestion has not gotten any better. However, for Driver’s Ed, the new parking arrangements have helped out a lot.

Before, students had to move their cars out of the range by 3:00, which did not happen most days. It made it difficult for students to drive and learn new maneuvers when their lane was blocked by a parked car.

“There were signs up that said no parking after three, but you get kids that go athletic competitions and whether it’s practice or games on the road or whatever, and they don’t move their cars during the school day and we have range going, it  shuts down what we’re trying to do

Not only did parking in the range bring frustration, but it actually ruined the range. Having cars parked on it for the entire school year really wore it down.

In the end, the parking lot changes didn’t actually change a lot. It helps Driver’s Ed run more smoothly, but looking at the other problems? Students are stuck with the same problems they’ve always had, a parking lot crowded with tardy teenagers. 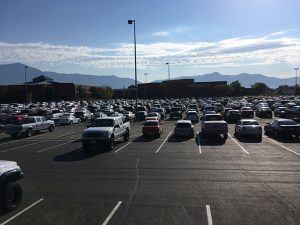 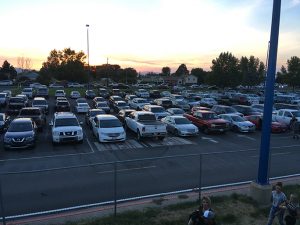