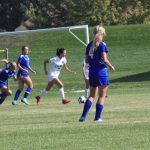 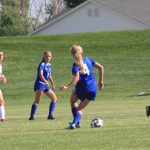 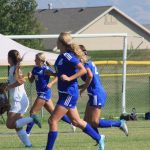 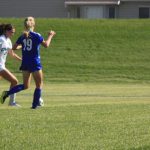 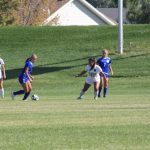 Dog decides to join in the game. 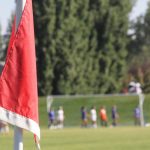 The girls soccer team played the Syracuse Titans on Tuesday, September 11, and ultimately the Titans remained undefeated and Fremont lost with a score of 0-3.

The game started with a shot from Syracuse less than 40 minutes into the game, though the shot didn’t score a goal.

Due to the 89 degree heat, the ref called a water break 20 minutes into the first half, and five minutes later Syracuse’s number 14 shot, but she just missed the goal.

Less than a minute later, two Syracuse players were closing in on the goal, when number 4, Sarah Seaich, ran in front of them and smoothly got the ball out and back down the field.

Two minutes later, Syracuse was back and shooting at Fremont’s keeper, number 00, Sydnee Stephens, who blocked the shot, keeping the Titans from scoring.

The ball traveled back up and down the field for 10 minutes, with only one shot coming from Syracuse that was caught by Stephens.

The game had to be paused momentarily during stoppage time when a dog raced onto the field, apparently eager to get a closer look at the ball.

When the game resumed, number 11, Sidney East, took a shot, but the keeper caught the ball.

There were three more close shots from Syracuse, though none of them scored before the half ended.

Seven minutes into the second half, Fremont’s number 19, Payton Ivins took a shot that was just barely caught by the keeper.

Only a minute later, number 5, Brynlee Barker, collided with a Syracuse player.

The Syracuse player got up and appeared to be okay, but Barker stayed down for just over three minutes before being carried off the field.

The game resumed with a corner kick from Fremont. The kick nearly resulted in a goal when the goalie bobbled the ball, but she quickly grabbed hold of it.

The spectators on the sidelines nearly rioted 14 minutes into the second half when there was a moment that the ball appeared to cross the line into the goal. The refs decided not to count the shot.

Another shot was taken from Syracuse and it just went over the top of the goal.

At the twenty minute mark in the second half, number 36, Taylor Chugg, took a shot that barely went over the crossbar.

For the majority of the remaining time, the ball went back and forth from team to team, both sides of the field, but no one scored.

With only three minutes left in the game, Syracuse’s Caroline Stringfellow scored the first goal of the game.

During stoppage time, Ashlyn Hall scored for Syracuse, followed closely by another goal from Sarah Wynn, before the game came to an end with a score of 0-3 for Syracuse.