“We bring color and actually move the field with it,” said Jennifer Jackson.

“We’re the fun part of the show,” said Olyvia Mayer

These four girls are more than just the front of the marching band, but a team that loves what they do.

“When the bad gets a great visual score, we 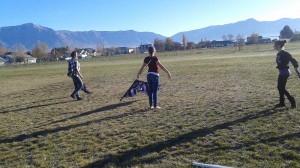 play a big part in that score,” said Paige Hock.

Colorguard captures the audience . It takes talent and hard work to be able to do the routines that they do.

“If you do a really high toss and catch it just right, every one will hold their breath,” said Olyvia Mayer.

The vibrant colored flags bring attention to the band that wouldn’t be there without colorguard. Not only are they working with flags, but rifles have become a new edition to their performance. 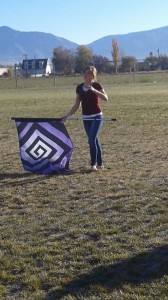 Cologuard is looking for anyone interested in joining colorguard, both boys and girls. If interested, you can talk to any of the members, Madi Sines, Olyvia Mayer, Paige Hock, or Jennifer Jackson.